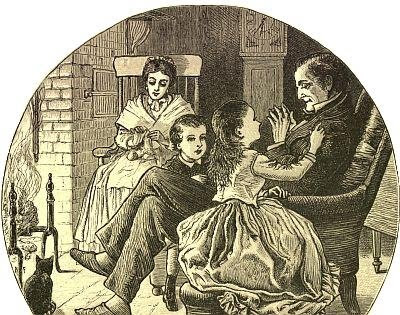 From "The Little People of the Snow" by William Cullen Bryant
Illustrator: Alfred Fredricks and Engraved by A. Bobbett
0
This cold day has been perfect for a rendez vous with Gutenberg by the fire. He didn't have a lot to offer though. Or have I finally learnt that I can't read ten books at the same time? I did save some interesting links but only downloaded three books.
0
"The Little People of the Snow" from 1873 is a terrible sentimental story where a small girl dies in the snow — the only reason I downloaded it, is that I like the illustrations.
0 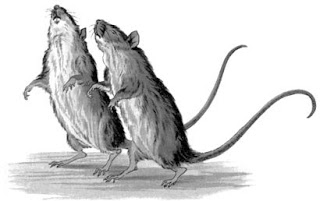 From
"What became of Them? and, The Conceited Little Pig" by G. Boare, Illustrator: A. M. Lockyer
0
The other book I couldn't resist was "What became of Them?" mainly because I have a mouse theme going on in one of my Swedish blogs (it started on December 20 and has more pictures than text).
The third book is a horrible little book that was meant to teach young girls to know their place and be content with what life offers. I downloaded it only because I have it in Swedish and wanted to take a look at the English original.The book is "A Princess in Calico" by Edith Ferguson Black — this book is from 1904 but I’m sure it is older as my Swedish copy was printed in 1901. I found a review from New York Times published April 29, 1905. Even at that time they found the book too good to be true:
0
Here is a book designed to help young girls to attain that high eminence of virtue which should be their natural ambition. Pauline Harding was the eldest of many children -- most of the younger ones being the issue of her father's second marriage with a woman not too mild of temper. On the little farm of Sleepy Hollow there was much to be done; and Pauline dragged through the dreary days without finding much happiness. At last, however, an invitation to visit some Boston relatives changed all that. She became a member of a refined and wealthy family, applied herself properly to her books, and acquired many noble and enviable traits. And it was while on this Boston visit, through friendship with a beautiful and religious invalid, that she first laid the foundations of the charchter which the author intends should undoubtedly prove an inspiration to all young girls.
It must be confessed that although Pauline was almost too good to be true, she appeared to get very little fun out of life. Indeed, to those who neither have nor expect to attain her altitudes she seems dangerously like a little prig at times - but there is not much fear after all, that many of the readers of Mrs. Black's story will attain Pauline's extreme goodness.
Upplagd av em kl. 18:54