After all manner of professors have done their
best for us, the place we are to get knowledge
is in books. The true university of these days is
a collection of books.
00000000000000000000000 Thomas Carlyle 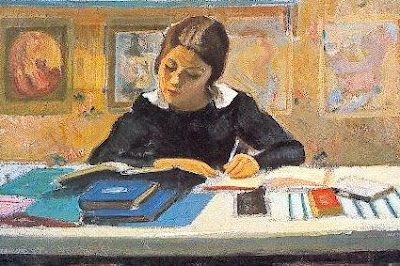 Laura Davidson just phoned from Oxford. She wrote me a fan letter telling me her husband, a Swarthmore professor, was working at Balliol for a year and that they and their fifteen-year-old son were fans of the book and wanted me to come to Oxford. I wrote back and told her when I was coming to London and she actually rescheduled a Paris vacation just so she'd be in Oxford when I came. When I picked up the phone just now and said hello, she said:
'Hi, it's Laura Davidson, how are you, when are you coming to Oxford? My son is dying of suspense.'
We settled on next Friday. She said there are trains almost every hour, call and let her know which one I'm on and she'll meet it. She'll carry the book so I'll know her, I'm paranoid enough about traveling when I’m home and healthy, and the prospect of strange railroad stations and train trips over here kind of wears me out. But Oxford I have to see. There's one suite of freshman's rooms at Trinity College which John Donne, John Henry Newman and Arthur Quiller-Couch all lived in, in various long-gone eras. Whatever I know about writing English those three men taught me, and before I die I want to stand in their freshman's rooms and call their names blessed.
Q (Quiller-Couch) was all by himseIf my college education. I went down to the public library one day when I was seventeen looking for books on the art of writing, and found five books of lectures which Q had delivered to his students of writing at Cambridge.
'Just what I need !' I congratulated myself, I hurried home with the first volume and started reading and got to page 3 and hit a snag : Q was lecturing to young men educated at Eton and Harrow. He therefore assumed that his students - including me had read Paradise Lost as a matter of course and would understand his analysis of the 'Invocation to Light' in Book 9. So I said, 'Wait here,' and went down to the library got Paradise Lost and took it home and started reading it and got to page 3, when I hit a snag :
Milton assumed I'd read the Christian version of Isaiah and the New Testament and had learned all about Lucifer and the War in Heaven, and since I'd been reared in Judaism I hadn't. So I said, 'Wait here,' and borrowed a Christian Bible and read about Lucifer and so forth, an then went back to Milton and read Paradise Lost, and then finally got back to Q, page 3. On page 4 or 5, I discovered that the point of the sentence at the top of the page was in Latin and the long quotation at the bottom of the page was in Greek. So I advertised in the Saturday Review for somebody to teach me Latin and Greek, and went back to Q meanwhile, and discovered he assumed I not only knew all the plays of Shakespeare, and Boswell's Johnson, but also the Second Book of Esdras, which is not in the Old Testament and not in the New Testament, it's in the Apocrypha, which is a set of books nobody had ever thought to tell me existed .
So what with one thing and another and an average of three 'Wait 'here's' a week, it took me eleven years to get through Q's five books of lectures.
Q also introduced me to John Henry Newman, who taught at Oriel, Oxford, and when I finish with Trinity I'm going over to Oriel and sit in John Henry's chapel and tell him I still don't know what he was talking about most of the time but I've got whole pages of the Apologia by heart, and I own a first edition of The Idea of a University.