The books that help you most are those which
make you think that most. The hardest way of
learning is that of easy reading; but a great
book that comes from a great thinker is a ship of
thought, deep freighted with truth and beauty.
000000000000000000 Theodore Parker 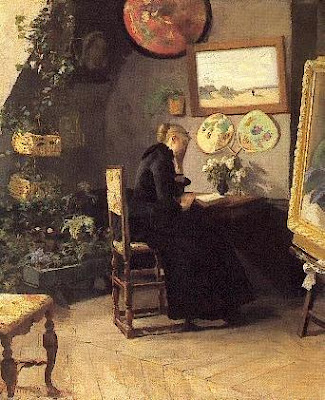 There is a line of poetry so familiar to me that I well might inadvertently think it mine, and be blamed for passing off as my own something not of my making; a line mixed so closely with the working of my mind that it comes back to me every winter whenever the transforming snowfall alters the ordinary aspect of fields and woods. I am not sure where it comes from, but I fancy it is by Ralph Waldo Emerson, whose poetical works I do not happen to possess, and it runs

The frolic architecture of the snow.

I am not sure either whether it is good poetry or not – a little precious, perhaps, a little whimsical – but it does convey something to me of the quaIity fresh snow gives to the landscape, something of the black-and-whiteness, the emphasized design of boundaries, the darkness of water, the toss of trees Frolic. Yes, it has an altering touch; nothing else is like it. Of course, to be beautiful, snow must be thick and fresh; the patchy days of thaw are Nature at her ugliest, when it is better to avert the eyes until everything is green and brown again.
The recent show was preceded by three days of something even more beautiful, something which the foot of man does not smirch, nor the ruts of his waggon wheels impair. The hoar frost is inviolable. Each twig and blade sparkled separately, as the big red sun came slowly overlaying the whiteness with a tinge of pink. The world was so crisp, you could almost hear it crackle. On every pane of the windows the frost had drawn patterns as exquisite as the veining of transparent leaves, no two alike, in a very low relief which one traced with the tip of a finger sending correspondent filaments of cold up the veining of one's arm. A thing to be noted during the days of hoar frost was the peculiar brilliant green of moss in woodland paths. It came through the whiteness with an almost vicious viridescence.