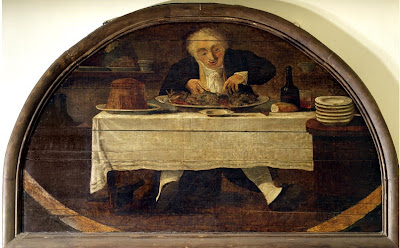 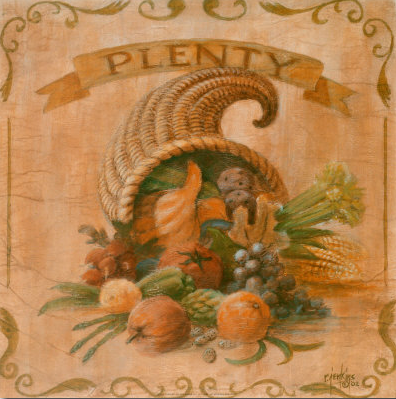 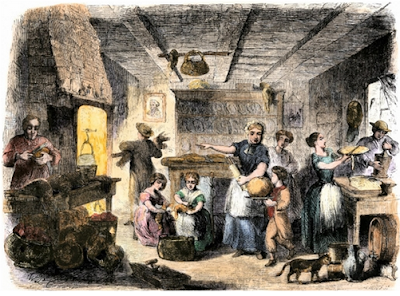 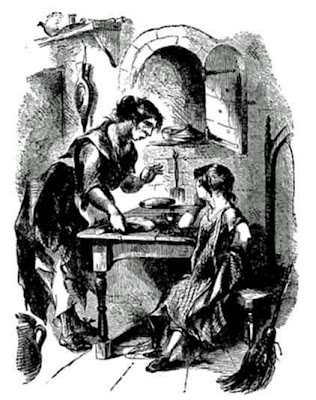 "I am so glad it is Saturday afternoon!"—and little Hatty tossed off her bonnet, and shook out her hair, and skipped up to her mother, who sat making the baby's new red frock,—"I am glad it is Saturday; I don't see the use of going to school, and I wish I never had to look into a book again;" and down little Hatty jumped, two stairs at a time, into the kitchen, to ask Bridget for an apple.
Bridget's red arms were up to the elbows in flour, making pies, and Hatty said she should like to help her. Bridget smiled at the idea of "helping" her. But she liked Hatty; so she tied a great check apron round her, tucked her curls behind her ears, and gave her a bit of paste, and a little cup-plate on which to make herself a pie. So Hatty rolled out the paste, keeping one eye all the while on Bridget, to see how she did hers; and then she greased her little plate so that the pie need not stick to it. When that was done, she filled up the inside with stewed apple, then she tucked it all in with a nice "top crust," then she worked it all round the edge with a tiny little key she had in her pocket: then she looked up and said,
"Bridget! I wish I were you; I should have such a good time tasting the apple-sauce, to see if it were sweet enough. I should like to go out to service, Bridget, and never see that hateful school any more."
From ”Little Ferns For Fanny's Little Friends” by Fanny Fern
Have you ever used a tiny key to make a fluted pie crust? I have to admit that I don’t even try to make a pretty edge — I have plenty of patience when it comes to untangling two thousand threads in a warp, but not enough to handle the pie dough more than absolutely necessary.
This is Myrtle Reed’s Recife for apple pie:
APPLE PIE
Make a rich crust of half a pound of butter, a pound of flour, and a pinch of salt. Work with the fingers until it is like meal, and add ice-water to mix. Roll out, pat into shape, and line a pie-tin with the crust. Peel, core, and cut up good cooking apples, fill the pie, dot with butter, sprinkle with sugar and spice, cover with the other crust and bake. Sprinkle with powdered sugar before serving.
And her apple cobbler sounds more like a pie than a cobbler to me. I thought a cobbler only had a crust on the top.
APPLE COBBLER
Sift together four cupfuls of flour, two heaping teaspoonfuls of baking-powder, one teaspoonful of salt, and one tablespoonful of sugar. Work into it half a cupful of butter and add enough milk to make a dough that will roll. Line a deep buttered baking-dish with the dough rolled thin, fill with peeled, cored, and quartered apples sweetened and sprinkled with spice, cover the pan with the rest of the dough rolled into a crust, and steam for two hours and a half, or bake. Serve with a sauce made of syrup thickened with cornstarch, seasoned with lemon-juice, grated peel, butter, and grated nutmeg or other spice. Apricots, plums, and peaches or berries may be used in the same way.

I’m not a potato person, so I thought that I perhaps could get some good ideas for how to serve potatoes from Myrtle Reed’s chapter ”Twenty Ways to Cook Potatoes”. Most of them started with mashed potatoes, and since I still can chew, I avoid that. But I fond three recipies that I might try:
LYONNAISE POTATOES
Slice two small onions and fry in butter. Reheat with six or eight boiled potatoes sliced thin or cut into dice. Season with salt and pepper, cook until brown, sprinkle with minced parsley, and serve. A few drops of vinegar or a teaspoonful of lemon-juice may be added.
POTATOES AND CHEESE
Peel and chop raw potatoes and cook, covered, very slowly in seasoned butter. When they are soft, drain and put into a baking-dish in layers, alternating with grated Parmesan cheese. Pour over a little melted butter and bake for half an hour in a slow oven. Serve in the same dish.
POTATOES À LA PROVENÇALE
Peel and slice the potatoes, wipe very dry, and sauté in oil. Cook slowly, adding a little minced garlic and onion towards the last. Finish cooking in the oven. Just before serving, drain and season with salt, minced parsley, and lemon-juice.
Upplagd av em kl. 18:56 Inga kommentarer: